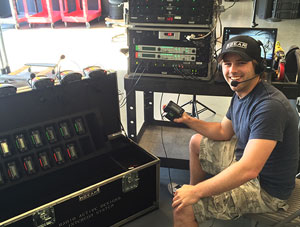 We opened Burbank, California-based RGEAR in 2006 with the goal of becoming the premier, boutique audio and video rental house with a specialty in reality television. Founded by technical supervisor Steve Abrego and audio supervisor Gregg Kita, we have exceeded expectations and continue to grow due in part to a constant eye on new products and technology.

When production companies come to us with their show (or idea for a show), we help them figure out how to technically make that happen on the production side. The idea is to let our customer concentrate on the creative while we handle all of their technical needs, including providing the skilled professionals necessary to pull it all together.

Lately, the RF bands we use for production audio have become more and more crowded as we continue to increase the amount of wireless needed for each show. At the same time, the usable UHF range is decreasing. Staying ahead of the curve and solving potential complications before they become real problems is one of the reasons we have been so successful. So we evaluated the amount of RF required and started looking for products that might lighten our RF load. During this process we were introduced to the UV-1G wireless intercom system from Radio Active Designs. We started using it immediately on one of our major projects, Food Network’s popular television show Cutthroat Kitchen and its spinoff Camp Cutthroat.

The UV-1G wireless system is unique in that the base station uses only a sliver of UHF while the belt packs operate solely in the mostly uninhabited VHF range. With the RF spectrum getting smaller, our first goal was to free up available UHF frequencies. By having the transmit signal from the belt pack to the base station operate in VHF we are able to open up space in our UHF coordination needed for cast and camera sends, while also limiting the quantity of RX antennas used per install.

In addition, by operating on a larger wave length (VHF), the signal from each individual belt pack is able to transmit further and with greater penetration ability. This is helpful on set but we have also found it equally beneficial in conference applications. It allows the signal to propagate through a room filled with people (usually a problem for frequency coordination in a higher spectrum) with little signal loss. An excellent bonus to having the system in our inventory.

Another perk is that we can quickly “restructure” the system in order to match it to the user ability of our clients. For instance, “Cutthroat Kitchen” and “Camp Cutthroat” are two very different setups. However, we are easily able to structure the system so that they can be utilized for both productions in a way that is seamless for the user and requires minimal labor on the installation end.

Recently, we used the UV-1G to create a system on the fly that needed to be shipped very quickly for a large conference arena. Because we were able to tether the system with other systems at the arena, we were able to create a “hybrid” wired and wireless comm system that allowed the control room to be over 1000ft away from the wireless zone where the handheld camera operators were located. Because the UV-1G is so flexible, it allows our team to more easily meet our customers’ demands.

Keeping a thumb on technology is extremely important in this industry – and these days there is plenty to keep an eye on. The Radio Active Design gear has proven to not only help minimize potential RF difficulties, but has also helped us stay ahead of the RF technology curve.

Isaac Abrego is currently the audio manager at RGEAR. He was first introduced to the challenges of RF while working as an A2 on the Bachelor/Bachelorette series. Since then he has completed four years of study of RF as well as modern computing techniques used for audio. He joined RGEAR as the audio manager in 2015 with a goal of building and designing systems that are able to operate with the modern constraints of RF.